I casually changed out activities every week to 10 days for several months.

Full Disclosure: The ideas in this post work! They were super fun and easy to put together at the time! BUT… we also ended up having 4 kids in 5 years, and alas, the shelf with tiny baby accessible pieces had to go once we had a baby crawling or walking. Which was basically always. If you have a separate space for these types of activities, or only one 2-3 year old in your house, and you want to make a Montessori-inspired learning shelf for your kiddo, go for it! But I never figured out how to make this work with babies around 🙂

We have these little mini puzzles* – the whole alphabet came in a set, per the recommendation of a friend. I was putting out one letter at a time, but now I have 3 or 4 out. She loves puzzles and is learning beginning phonics sounds (H is for hat, I is for ice, etc…) Mancala stones on the letter of the week. She likes to get the stones right on the dots, so she was getting frustrated with the mancala stones because they move so easily. I ended up putting them away and we did dot stickers instead. She really liked these stickers for a while. They’re $1 for a big pack at walmart. She got bored of them after a couple weeks too so I put them away for now. They’ll be “new” again later 🙂 One day we did play dough on a letter. She likes to color in the dots better. Or use pennies. Or cheerios. Or anything small and round.
The number one fave is these dot paints though. I’m telling you, these are the bomb. I had seen some dot paint marker things around the interwebs and picked some up at Target. They stunk!!!! I thought it was user-error but turns out, brand matters. Our library has a huge collection of them, all Do-A-Dot*, all awesome.
They let the kids use them on a letter of the week sheet at the end of toddler time. Addie loves them! I ordered some of the original rainbow color ones* with an Amazon gift card. It’s 16 buckeroos for a pack of six which I thought was kind of expensive. But, they are so fun! And I hear they last a loooooong time. 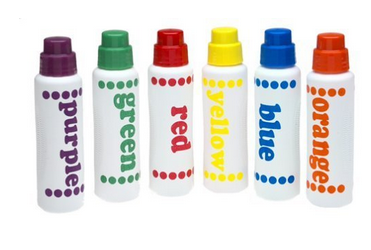 [Update: 8/17- 4 months later, these are still going strong, even the green one to which the top was lost almost immediately. We love these and have gifted them a couple times in the last few months!]
[Another update 11 months later March 2016 – they are all still going strong, even the one we lost a top to. Emma was into eating them for a while, so that kinda destroyed the perfect circle. But they still work. I’ll order a second set with new colors soon. And the girls aren’t tired of them!]
At first, she just put dots everywhere. Now she is very careful to fill every dot with a dot of paint. This was up for a couple days – pom pom drop. I saw this picture online. Obviously mine is way less cool. Maybe we’ll make the fancy version together soon. We saw a giant rainbow decoration at a school the other day, and now she likes talking about rainbows. So, maybe we’ll do some rainbow themed stuff. source
source
Speaking of Rainbows, this was a hit too! (From Sew Fantastic) A lot of montessori-inspired activities at this age have to do with developing the fine motor skills required for holding a pen or pencil. Well, that’s what I’ve been reading anyway… I’m not trained in Montessori, but I’ve been Googling… so I’m basically an expert. 😉

But, it’s been interesting to see her get that! Sometimes she likes to do fast coloring and wants to hold it in a fist-type grasp. More often than not now though, she holds it like this. Here are some other fine-motor favorites we’ve had on the shelf:

The plastic needle came in a two pack for $1.50 from Hobby Lobby, near the needle point stuff. The wooden beads were also there – near the kids crafts. A bag with about 50 wooden beads was $2. Or if you prefer not to leave your couch, you can order it all from Amazon. 🙂 Wooden beads | needles

I also picked up a tiny hoop for 60 cents at Hobby Lobby and put some of that mesh stuff that goes in your kitchen drawers in it. They also sell plastic meant for kids “needlepoint” for these hoops if you don’t have extra drawer non-slip mesh laying around, or if you want a fancy shape.

She doesn’t totally get this yet. Addie likes to put it through the front and then have me put it back through again. But the 4 year old sibling of a piano student I have LOVES this. She comes and plays with it every week during her brother’s lesson, so I keep it out for her. Those are the favorites from our Montessori Inspired work shelf lately.
The newness and fun-ness (I made that word up) of a particular activity seems to wear off after a week to ten days. For the first few days an activity is new, she’ll go get it and do it herself over and over and over. That is so fun to watch!