We read Dave Ramsey’s book The Total Money Makeover (which I highly recommend, by the way) and listened to all the teachings from the class when we first got married. We were on board. Debt is dumb, pay cash, blah blah blah. Made perfect sense.

Then we took out a BIG loan for Ben to go to school for one year at Harvard. We really really really prayed through the decision and believed it was where God was leading us so we did it. Debt and all… Knowing we’d put fun on pause for a few years and pay it back as quickly as possible. 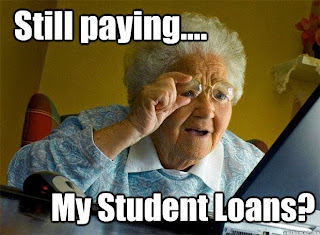 Now that we’re in the “paying it back as quickly as possible” stage, I still think it was worth it, but phew, it is not fun. [Hind sight 20/20, we would have done a few things differently in the whole loan process, but that’s for another day.]

I think the biggest factor in getting out of debt is the mental and emotional side of the equation. We were on board with paying off our debt from day 1, but actually starting the process felt more like a leap of faith.  We think this is right and we’re excited to be debt free so we’ll give it a go. But as we’ve started to pay it off, something emotional has switched inside.

When we first started this back in December, we’d get a little extra money from something random and I would be all like,

“oh, now I can buy those new kitchen chairs I wanted which aren’t in the budget because of the extreme debt paydown…”

And Ben would be all like, “uh uh, no way, girlfriend. ALL EXTRA MONEY GOES TO DEBT.”

But now, when extra money comes in from somewhere or we don’t spend all of our budgeted amount for a category – we are both excited to pay it towards our loans. Crazy, right? It’s almost addicting. Also, kinda infuriating. Because this random student loan company (they call themselves “Great Lakes,” but we have affectionately renamed them “Stupid Lakes” in our budget spreadsheet)… they get our money. Money that could be going to our church plant, Compassion sponsored kids, a down payment, and buying people nice gifts… it’s all going to Stupid Lakes.

The more “mad” we’ve gotten about that, the easier it’s been to try to get rid of it as quick as is humanly possible (not to mention a lot of prayer for miraculous provisions to pay it down as quick as is divinely possible). Sure, the motivation ebbs and flows. One month, we have more extra and it’s super exciting. The next month, not so much.

At the end of the day though, we’re committed. Every extra dollar goes to student loans until our debt is gone.

I’m so glad you asked. Because I could talk about this all.day.long. But I won’t. Maybe. If you are not a person of Christian faith, you might disagree with this & feel free to skip this point, but we believe that we are stewards or managers of sorts. And that God has given us money to further his kingdom and his purposes with. Debt hinders us from giving generously to meet others’ needs. Sometimes, at the end of a more discouraging money date (where we don’t have as much as we wished to pay off the loans or we decide to say “no” to something that sounds fun), we picture what we will do when we have the amount of money we’re paying towards debt to give to other things. People in ministry we want to support financially, church plants, etc.

Seriously. This should be reason enough for people to pay off debt. (Although, since it’s not, it would suggest that perhaps paying off debt, and handling money in general, is perhaps more of an emotionally controlled decision than a mathematically or logically controlled decision.) Our loans are sitting at 6.8%. Ben and I have agreed not to disclose specific numbers on here for now, so let’s use national averages for individual student loan debt and talk numbers for a minute. The average amount of debt a college senior graduates with is $29,400. (source) We took out way more, by the way.

The interest is not in your favor, folks. Some people will say, “well I can get 12% in mutual funds so I should pay the minimums and invest the difference and I’ll come out ahead.” Ok. But do you? I’ve NEVER heard of anyone actually doing this. (Doesn’t mean it doesn’t happen, but I’m just saying…) I’m sure someone has done this. Certainly he or she is in the minority, right? What are most of the people you know that have debt doing with their above-minimum-payment money? Investing it or spending it?

To me, this is the factor that would motivate anyone. Debt makes me feel stuck. We feel in bondage to our payments. And that’s a bad feeling. We don’t like being told by some creditor what to do with our money. But every month we have to pay them the money. Whether it’s your credit card minimum, or your car payment, or your student loan payment, or an outstanding medical bill, it’s not enjoyable having someone else tell you what to do with your money. If WE choose to pay down the debt as fast as possible, then we will again have control over where all our money goes.  And we’ll be financially free.

So many more reasons could be listed, but I think those are our top 3.

It’s not easy. [Although I have to say, saying ‘no’ gets a little easier the more you practice…]

But it will be so much fun when no one is telling us how to spend money.

It will be freeing to not owe anyone. [Update: After paying off debt aggressively for one year, I would say the biggest key to it is the budget. Check out my series on budgeting here.]