Our first girl was due January 9, 2013. Ok. So, I’m a little late on posting her birth story. Better late than never, right? I actually wrote this in a scrapbook (remember those?) a few months after Addie was born and in {brackets}, I have added a couple after-the-fact thoughts for your reading pleasure.

My dearest firstborn girl,
I’m sure most of these details will fade from our memories over time, so I thought I’d better write them down… Just in case you’re ever wondering about the day you were born.

I had frequent and intense braxton hicks contractions all the time since about 28 weeks. In fact, I was pretty sure I was in labor one day and had to miss a school sing along that I was conducting. But, it was a false alarm. Basically from that point forward, I always assumed I wasn’t in labor. {They always say ‘you’ll know,’ but as a first time preggo, 50lbs heavier than usual and ready to pop, I was a little skeptical.} We celebrated Christmas with the Cook side of the family on Dec 27. Several extended relatives were coming in from out of town for more holiday celebrating, and they’d also planned a baby shower for you.

To say I was uncomfortable was an understatement. I was miserable. and HUGE! 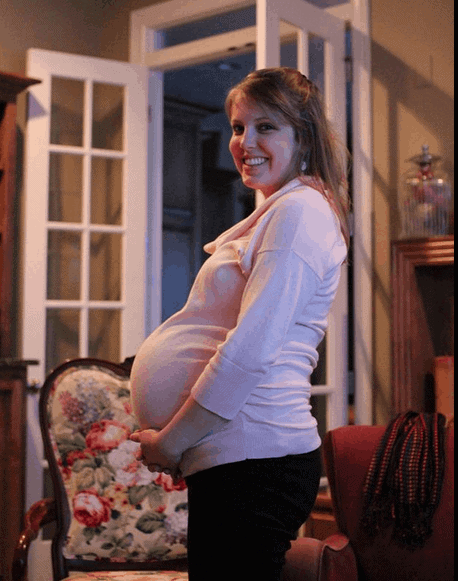 {This was taken a week before Addie was born. For the record, I painted my toes by myself on the same day this picture was taken.}

We were staying at Grammy & Papa’s house for a couple days and I remember standing in the bathroom begging God to either get you out or ease my discomfort for a few days. {My close friends reading this know I’m such a pregnant wimp. Spoiler alert… I’ve never been pregnant full term. Many of them have gone 1-2 weeks past!}

{I rewrote this part and it gets a little personal. Consider yourself warned. If you’ve been pregnant or are the baby daddy of someone who’s been pregnant, you know there are some wives tales about inducing labor that become pretty appealing those last few weeks. Super spicy food, pineapple, sex. A little while after trying the latter option, I had to go to the bathroom (for the 127th time that day) and just wouldn’t stop dripping. I had read that sometimes your water breaks in a drip. I was hopeful, but not contracting much differently than I had been for 10 weeks. I mentioned we were staying at Bens’ parents’ house and his dad is a family practice doc. At 9:30 or 10 pm, Ben asked his dad about my persistent dripping, and how to know if it was my water breaking. I warned you about getting personal. They took a sample of my fluid into his dad’s office to look under a microscope and confirm. Looking back, this was really nice of him. He must have basically done this to ease my mind because obviously time would have told whether or not I was in labor. Thanks Paul.}

While they were gone, I went into labor.

And I knew it. People were right. When Ben got back I told him I was in labor and he was skeptical.

At first I wasn’t 100% positive, but within 30 minutes or so, the contractions became more rhythmic, like waves. 5-10 minutes apart each. I could feel when the next one was going to come and I could feel it fall off. They all felt exactly the same. And they all had slight lower back pain accompanying them.

Understandably. I’d been the pregnant lady crying wolf for weeks.

I couldn’t sleep even though you’re supposed to sleep in early labor. No way. I journaled the following:

Lord, guide us. I think this is it. They say you know, but I’ve had so many false alarms, I’m hesitant to say for sure. Ben is sleeping. I’ve showered just in case and I don’t feel sleepy. I had a small snack and peed a million times in the last 2 hours. Including a sneeze pee. Oh pregnancy how I won’t miss you. I’m eager to pack a bag and wake Ben but it’s 2:00 am. I think I’ll wait till I’ve been timing longer. Things I feel: extreme pressure, incontinence, the contraction is like a wave with a clear peak. In between contractions, I feel fine. Super alert.

I woke Ben and we left Omaha around 3:00 am, leaving his parents a note. {I wasn’t quite 5 minutes apart yet, but we had to drive an hour to Lincoln, where we lived and thus where our midwife and hospital were. Needless to say, we didn’t want to leave too late.}

We got to the hospital around 4 am on December 29, 2012, 10 days early before due date. I was 4 cm dilated and 90% effaced. We were so excited. Although the contractions were strong, the nurse said she knew I was doing well because I was still smiling during contractions… little did I know what was ahead.

At 5:42, 5-6 cm dilated and starting to feel more intense back pain during contractions.

An hour later, I was 7 cm dilated and I hopped into the jacuzzi. {We’d taken a breathing class and I was open to non-medicated or medicated labor, though I was hoping for non… hindsight, I don’t remember why.}

Things were progressing very quickly for a first time birth & our nurse said she was shocked to find out I was at 7 cm already because I still seemed relatively upbeat. Nurse Amber was a Godsend by the way. She was a friend of a friend who happened to be on shift when we arrived. She kept extending her shift through my labor thinking you would come any minute. She ended up having to leave before you came but she helped me all the way through the hardest parts. She was a believer, so her words were very encouraging. And she came back and visited after you were born.

By 9 am, I progressed to the transition phase of labor. This is where my memory gets fuzzy. At some point in labor, we learned you were OT (occiput transverse), sunny side up if you will. Your head was pushing against my back (hence the back pain) and your face was up instead of down. We had to wait for you to shift to be able to deliver vaginally. Hence the multiple hours in transition. We kept thinking that you would be ready any minute because things had progressed so quickly thus far, but you stayed turned the wrong way. At 11 am, our midwife Jeralyn broke my water to expedite the process. I labored in transition for 4 hours or so with no progress.

{If you’ve labored in transition you know what this feels like. If you haven’t, I highly recommend trying to avoid it. My natural momma friends are probably booing, and that’s fine. I actually don’t have a strong opinion on this. To each her own. But seriously. Words cannot describe the pain. I have only glimpses of memory of those hours.}

I do remember my water breaking right before the pain stepped it up a notch. I remember because it was so much water – it GUSHED out. Like, soaked the bed and the pillow I brought and I was drenched. Jeralyn said she’d never seen so much water come out. And she’d delivered a lot of babies.

I remember crying. Shaking. I remember the intense back pain & that all these different positions were suggested, but after a while, my body just shut down. I tried laying on my side for a while, and I remember I could feel them coming every minute or so. It felt like an outside power almost. They would just take over my body. At the end of each one, I would just collapse in tears, exhausted. I remember that I thought it was crazy anyone would talk about relaxing during this. Haha no freaking way. It was all I could do to breathe. I remember pretty clearly feeling like I couldn’t do it anymore and wondering why I hadn’t gotten an epidural yet. I asked Jeralyn, how much longer is it gonna be? And, I remember her answer very clearly, “well, the baby hasn’t turned yet and once she does, you might still have to push for a couple hours. We don’t know.”

Before she finished that sentence I said, “I want an epidural.” 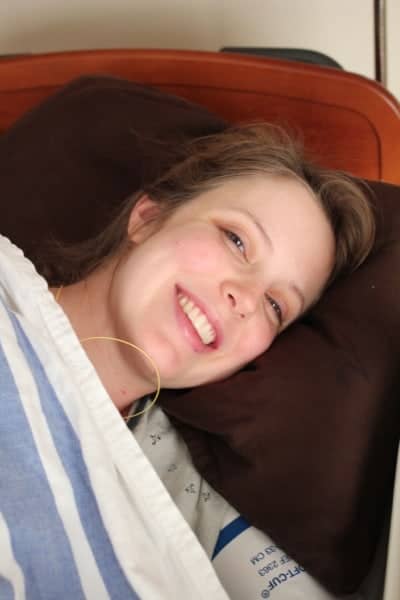 At 12:15 pm, Ben texted family with this picture to say I’d been at 9 cm for a long time and finally decided to get an epidural. They were relieved. Ben had been texting them updates earlier in the day, but as transition progressed, he stopped texting. They thought maybe something had gone wrong. I got an epidural at 1 pm and passed out – so so tired. Still 9 cm dilated. Apparently Ben had left the room at one point to take a break, while the nurse coached me through some contractions. I have no memory of that. But it was hard on him. He has a STRONG opinion now that I get epidurals 🙂 I love that man.

Hind sight, I should have gotten one sooner. I know people avoid them for their own reasons but henceforth, I will have epidurals ASAP with my babies.

After an epidural and a nap, I was ready to start pushing. I pushed for 2 ½ hours. Suddenly, Addie’s heart rate began fluctuating too much. They decided to vacuum extract her. The minute they decided it was necessary, a TON of people rushed into the room. The doctor quickly explained what they were doing, told me to push and she was out 30 seconds later. 4:36 pm. The instant I felt her come out, a wave of joy flooded over me. I burst into tears at the sound of the sweetest cry. Ben and I hugged and kissed, and then the nurse laid her on my chest as we announced her name: Adelyn Joy Cook. 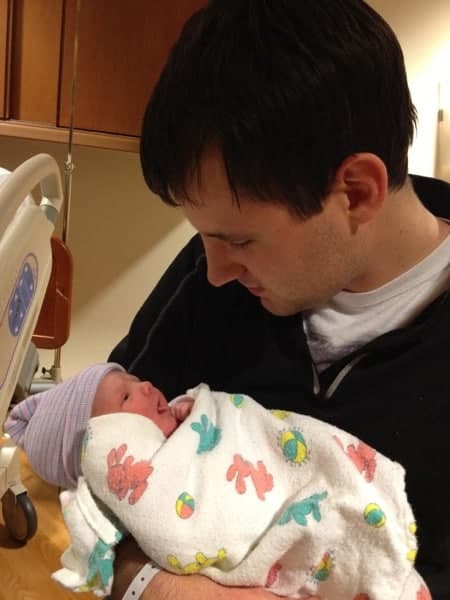 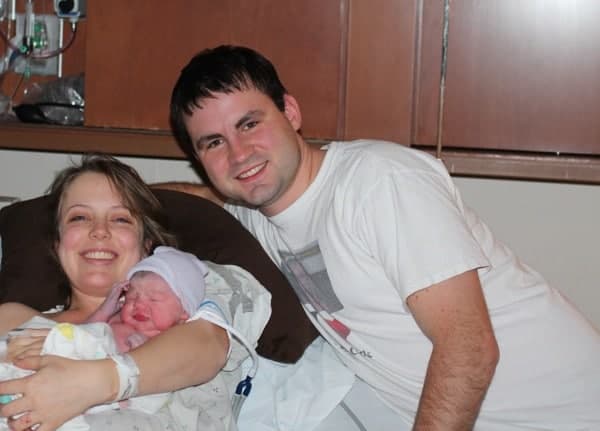 Ben is wearing his “I <3 Renee Cook shirt.” Yep, he happened to have one. Don’t ask.

Lots of people came to visit that day. We told my parents & brother who were in Chicago when I was in labor. Fortunately they had ample time to make the drive. I love this picture – I took it from inside the nursery where Ben and I were with Addie while they did all her measuring and bathing. 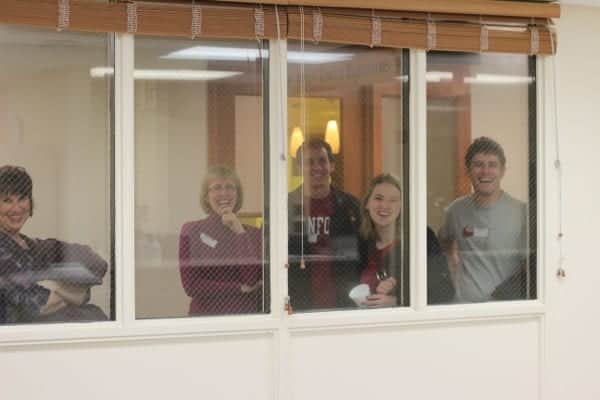 p.s. if you’re a sucker for a birth story like I am, here’s Emma’s. Her birth was the complete opposite of Addie’s…